When many of us conjure images of pirates in the 1700s, we envision equatorial seas, tropical settings, and possibly a squawking parrot for good measure. And that would be accurate—but only for part of a pirate’s tale. Often, 18th century pirates were running routes along the eastern seaboard of the United States, bringing them as far north as New England (as un-tropical a destination as one might wish).

In New England Legends & Folklore, wild tales of early New England mysteries, intrigues, and adventures have been preserved by Samuel Adams Drake (1833-1905), a journalist and Civil War veteran. In this particular historical foray, we are swept up in a tale of overthrown ships, imprisoned sailors, secret plots, and coded messages as Drake tells of captive sailors attempting to overthrow their pirate captors at sea.

An Escape from Pirates

According to the historian Thucydides, the Greeks were the first pirates. The ancient poets tell us that those who sailed along the coasts in quest of prey were everywhere accosted with the question, “whether they were pirates,” not as a term of reproach, but of honor. So also the Vikings of the North were little less than corsairs, whose valiant deeds of arms, and whose adventurous voyages to distant lands, celebrated in their sagas, were conceived and performed with no nobler purpose than robbery. But the modern pirate had neither the rude sense of honor nor the chivalrous notions of warfare distinguishing his ancient prototype. He was simply a robber and a murderer, bidding all honest traders to “stand and deliver” like the aquatic highwayman that he was. Even the mildest-mannered man among them “that ever scuttled ship or cut a throat” was no more than this; while the majority were beings fitted by nature for a career of crime, the bare recital of which makes us shudder.

During the first quarter of the eighteenth century our own seas swarmed with these freebooters, whose depredations upon our commerce are the theme of some of the most startling episodes preserved in the whole annals of piracy. Blackbeard, Low, and Phillips stand pre-eminent at the head of this black list. It is with the last that our story has to do.

In the course of his last piratical cruise, during which he swept the coast from Jamaica to Newfoundland, Phillips fell in with and captured the sloop ” Dolphin,” Andrew Harraden, master, belonging to Cape Ann. The ”Dolphin,” being a better vessel than his own, the pirate transferred his black flag to her, sending the crew away in another of his prizes. Captain Harraden was, however, detained a prisoner on board his own vessel. Two of the pirate crew, John Fillmore, of Ipswich, and Edward Cheesman were men whom Phillips had taken out of the ships that he had plundered and pressed into his service, thus making them pirates against their will.

Being found useful, Cheesman had been promoted to the post of ship’s carpenter shortly before the “Dolphin” was captured. Both he and Fillmore, however, were brave young fellows, and both had fully determined, come what might, to take the first opportunity that presented itself of escaping from Phillips’ clutches; but the jealous watchfulness of the older pirates was such that they could get no opportunity of talking to each other about what was in their minds, except when feigning to be asleep, or when pretending to play at cards together. But by stealth they at length came to an understanding.

To Captain Harraden these two presently broached their purpose; and finding him ready and willing to strike a blow for the recovery of his vessel and his liberty, they with four confederates, who were already pledged to stand by them, fixed the day and the hour for making the hazardous attempt.

When the appointed hour of noon had arrived, Cheesman, the leader, with Fillmore and Harraden, were on deck, as also were Nut, the master of the “Dolphin,” a fellow of great strength and courage, the boatswain, and some others of the pirate crew. But of all on board, Nut and the boatswain were the two whom the conspirators most feared to encounter. Cheesman, however, promised to take care of the master if the others would attend to the boatswain.

No firearms were to be used. The attack was to be suddenly made, and possession of the deck to be gained, before the alarm should spread below. Cheesman, having left his working tools on the deck, as if he were going to use them about the vessel, walked aft to begin with the master; but seeing some signs of timidity in Harraden, he came back, gave him and his mates a dram of brandy each, drinking to the boatswain and the master the toast, “To our next merry-meeting.” He then took a turn up and down the deck with Nut, in order to occupy the pirate’s attention, while Fillmore, as if in sport, picked up the carpenter’s axe from where it was lying, and began to twirl it around on the point.

This was the signal agreed upon.

Cheesman instantly grappled with the master, and, being a man of powerful frame, after a brief struggle pitched him over the side into the sea. Fillmore, rushing upon the boatswain, with one blow of the axe laid him dead upon the deck. The noise of the scuffle brought the pirate chief on deck; but Cheesman quickly disabled him with a blow from the carpenter’s mallet, which fractured his jawbone. Having armed himself with an adze, Harraden then sprang upon Phillips with his uplifted weapon; but the gunner of the pirate interposing between them, Cheesman tripped up his heels, throwing him into the arms of a confederate, who flung him overboard, after the master. Harraden then finished with Phillips.

The conspirators then jumped into the hold and fell upon the quartermaster, who was the only officer remaining alive; when a young lad on board pleaded so earnestly for his life that he was spared. The rest of the pirate crew being securely put in irons, the vessel was steered directly for Boston, where she arrived on the 3d of May, 1724, to the great joy of the people of the province. Two of the Pirates, Archer, the quartermaster, and William White, were tried, convicted, and executed. Fillmore, Cheesman, and their confederates were honorably acquitted. John Fillmore, the pirate in spite of himself, was the great-grandfather of the thirteenth President of the United States. 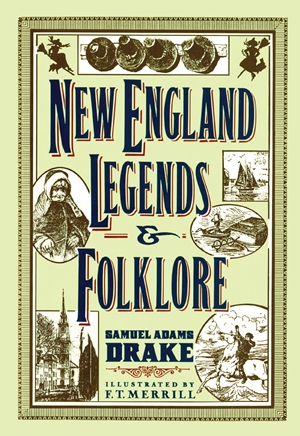 The rich and wonderful history of early New England isn’t just about pilgrims, the founding of the nation, and the American Revolution. It also includes incredible tales of shipwrecks and pirates, witches and Puritans, old mansions and terrifying ghosts, and dense forests and wind-swept beaches populated by strange and mysterious creatures.

This classic collection of the legends and folklore of New England will not only take you back to colonial days, where you will rediscover Plymouth Rock, the courtship of Priscilla by Myles Standish, and Paul Revere’s ride, but will introduce you to exciting and bizarre events long obscured by the mists of time.

Meet Molly Pitcher, the fortune-telling hag of Lynn, said to be descended from wizards; Agnes, maid of Marbleton’s Fountainhead Inn and a real-life Cinderella; Captain Teach, better known as the notorious pirate Blackbeard; and the wealthy widow Ann Hibbins, accused of being a witch and hanged from a tree in Boston.

If these amazing tales of real-life historical figures aren’t exciting enough, weird old New England was also a paranormal wonderland. Discover the massive sea serpent of Gloucester Bay; the testimony of the man who was chased by the double-headed snake of Newbury; the skeleton in armor pulled from the Fall River said to date to 1000 A.D.; and the terrifying Marblehead legend of the shrieking woman.

A classic of its kind, authored by a Civil War veteran who was closer in time to these stories than anyone living today can ever imagine, and illustrated with over 100 evocative period engravings, New England Legends & Folklore is a treasury of historical fact and literary flight of fancy.

Native New Englander Samuel Adams Drake (1833-1905) was a journalist and author of many popular histories including Old Landmarks of Boston, Heart of the White Mountains, The Making of New England, and The Battle of Gettysburg. The son of author Samuel Gardner Drake, he served as an officer during the Civil War.